A few weeks ago, one of my friends came to me with a problem — his phone charger was buzzing after the phone was fully charged. Obviously, my main worry was that the charger in question may not be safe. However, since I had no real experience with this kind of issue, I started digging. You might be surprised to learn that most chargers for phones and laptops can start making strange noises.

Personally, I’d expect my laptop to make noise. I’d even have a pretty good idea of what I can do to stop it. If you’re anything like me, you probably can’t imagine which component inside of a charger is capable of making noise. That’s what we’re about to figure out.

What Kind of Charger Noises Should You Look out For?

Never having heard a charger make noise, I wanted to know what kind of sound we’re talking about. Apparently, old cell phone chargers can make humming noises, and iPhone chargers have even been known to squeal! You can hear those sounds in different videos on YouTube. Moreover, if you want to understand the way I usually describe sounds, you can read up on onomatopoeia.

In the case of my friend’s charger, the noise could best be described as a buzzing or even crackling sound. However, it only occurred once his phone reached full charge, so it wasn’t like the iPhone charger in the video above. Still, that made me think of this problem in terms of when the charger is making noise. It could be:

If you end up taking your charger for repairs, I imagine that you should have the answers to several important questions. First, you should be able to describe the kind of noise the charger is producing. Additionally, you should have a general idea of when the noise is occurring. It could even be something I haven’t even mentioned here.

How Are Laptop Chargers Different?

Some laptop chargers produce a crackling noise right where the two charger parts meet — at the AC power adapter. In a phone charger, most of the components that could be making noise are inside the AC/DC power converter, which is the part that goes into the wall outlet. Laptop chargers are different in that they consist of several parts:

Conversely, a phone charger generally consists of a power converter with a USB port and a USB to micro USB cable. Phone chargers have all of the components that transfer electricity to your phone inside the part that goes into the power outlet. Meanwhile, a laptop charger has all the potential noisemakers further down the line. However, in essence, those two parts serve the same function — which is why they’re the ones that make noise.

Still, some laptop chargers do tend to make sounds that are slightly different from those phone chargers make. For example, the noise you hear at the beginning of the video below can be described as groaning at best. At worst, I’d say that the adapter is crackling. Clearly, a mix of electricity and crackling sounds is usually pretty electrifying.

Which Charger Components Are Producing the Noise?

From an engineer’s point of view, all electronics have the capacity to create noise. In fact, you could even say that most chargers are always making some kind of sound. Usually, though, they tend to produce frequencies in a range well above humans detection. In my article on white noise, I explained that our register ranges from 20–20,000 Herz.

However, the constant noise of electricity rushing through a power adaptor is usually closer to 30,000 Hz. But which component inside the adaptor can we hold responsible for this offense?

In a power adaptor, there are several parts that convert AC power to DC power. The process starts with an electromagnetic coil acting as a transformer — rather than an inductor. After that, the lower voltage power converts to DC in a diode bridge rectifier. From there, a switch rapidly turns the power on and off, after which the power goes through a capacitor which evens the flow out before sending it out to the power cable.

Believe it or not, most of these components can potentially start making noise. Generally, if the charger is making a high-pitched squealing sound — you can blame the transformer. While the electricity is passing through the coil, the component can actually start to vibrate, creating a resonance frequency. Most professionals call that kind of sound a “coil whine” — you may have noticed it on your old TV.

The other parts of the adapter can also make noise. As I have already explained, most switch circuits only produce high-frequency noises. However, they can sometimes be low enough to hear — which is when you’d notice a ticking sound. So what can you do about that?

What to Do When Your Charger Starts Making Noise

Before I dive into what you can do about your charger making noise, we should answer some final questions. For one, who’s to say you need to do anything at all? After all, if the charger is still doing its job, why should you try to fix it? Should you even worry about the odd buzzing sound?

On the one hand, I’ve found many examples of people claiming that their chargers have always been noisy. Most of the time, they keep working as you’d expect them to. However, sometimes, the excess noise is just one part of a larger problem. For example, if your adapter is noisy as well as prone to overheating — you might have a potential fire hazard on your hands.

And this isn’t a simple problem with a simple soundproofing solution, either. Most of the time, I’d be able to recommend that you use some kind of sound deadening material and be done with it. But if your charger is overheating, I can’t in good conscience recommend that you wrap it in vinyl, no matter how well it’ll withstand the heat. Aside from being a fire hazard, the heat will also have a detrimental effect on the power adapter.

In any case, once your charger starts making noise, it may already be too late to fix the issue. But, there’s a way to troubleshoot the issue to find the cause of the noise and fix it.

1. Check the Charger for Damage

First things first, you need to make sure that your charger hasn’t been physically damaged. If it started making noise suddenly, that will be the most likely explanation. After all, people generally let their chargers drag on the floor where they can get pulled and stepped on by anyone who happens upon them.

You should check the full length of the cable and pay special attention to the AC adapter. As I have mentioned, it’ll look pretty different on laptop chargers and phone chargers. Nonetheless, you’ll only be looking for basic external damages such as cracks and dents in the plastic, cut cords, and broken connectors.

Naturally, if you happen to notice one of those signs, you should probably just go ahead and skip to the last tip.

In the course of my research, I’ve found that some people have fixed their noisy chargers by simply plugging them into another outlet. It certainly couldn’t hurt if you tried it. And if it turns out the only issue was with an over or underpowered outlet, so much the better.

Some laptop brands have diagnostics tools that can help you determine if one of their components is underperforming. For example, HP has a built-in AC Adapter Test you can perform.

For it to work, you need to turn the laptop off and plug the charger in. Then, run the computer, rapidly pressing the Esc key until a menu appears — and press the F2 key. Once you’re in the HP PC Hardware Diagnostics main menu, select Component Tests, then Power, then AC Adapter. In the following window, press the Run once button and wait for the results.

If your adapter fails the test, your options will really depend on whether your device is still under warranty or not. If it is, you can just take it to a company service and let them repair or replace it. Even if it’s not, you should still get a new charger, but it’ll have to be on your own dime.

In the interest of ruling out all potential causes, you should check for fluctuations in the cord output. If there are any, it would mean that the capacitor isn’t doing a great job evening out the flow of power. Fortunately, the voltage output is easy to check for — you’ll just need a voltmeter. Whichever measurements you get, they should be steady, not spiking or dropping suddenly. 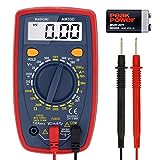 What’s more, you can also do a wattage calculation to make sure that your charger suits your device. You’ll be able to see the number of Volts and amps your laptop needs in order to run on the underside of the device. When you multiply those numbers, you should get the wattage you need from your charger.

For example, if your laptop needs 19.5 Volts and 2 amps, you’d need a charger that provides at least 39 watts. You can go higher, but never lower. Still, if you find a discrepancy in these measurements, your best bet would be to get another charger.

5. Repair or Replace the Noisy Component

There are some circumstances where getting a completely new charger may not be necessary. You should only try to repair it yourself if you know what you’re doing — otherwise, hand it over to professionals. But before you do that, there are a few things even an amateur can do, which is replacing a part of the charger.

Pretty much any electronics store will have a selection of adapters and cables available for all sorts of chargers. What’s more, they’re pretty easy to find online as well, though you should take care to get one that’s actually compatible with your device.

Still, if your charger requires more intricate work, pass it on to a more experienced person. It might even be covered by your warranty. If it’s not, I’d recommend investing in a new charger. Depending on the cost of repair services where you live, getting a new charger may be the most cost-efficient option.

6. Get a New Charger

If you decide to buy a new charger, I only have one piece of advice for you. Above all, make sure that you’re buying one from a reliable supplier. Take the time to find the official Amazon storefront of the company you’re looking at. That way, you won’t be sidetracked by off-brand products.

While I was looking for resources about noisy chargers, I found that an overwhelming majority of people experienced that issue with an off-brand charger. Those are also the products that tended to overheat the most, so you’d do well to avoid them.

What Causes The Noise & How To Fix It
» Read More «

Hopefully, this article has shed some light on the different reasons why a charger might start making noises. Ultimately, I’d say it comes down to the usual reason — age. The kind of chargers we have now don’t typically make audible sounds when they’re brand new. So if your charger starts buzzing, you’ll know why it’s happening.

What’s more, you’ll also know how to stop it. You’ll probably have to shell out some cash on replacement parts or a whole new charger. Still, I’m sure I’d sleep easier knowing that my charger wasn’t going to burn down my house if I let my phone charge overnight.