Dashboard vibrations are probably the most annoying sounds your vehicle could ever produce. If your car is generally a rattletrap, one more source of noise probably won’t be a huge problem. However, if you’ve taken great pains to prevent all the other squeaks and scrapes it can make, a new clatter can be particularly maddening. With that in mind, I wanted to explain how to stop dashboard rattle if you ever hear it.

Before I take you through the troubleshooting process, you should have a general overview of the things that might be causing the rattle. That will make the first step of the guide, which will be finding the exact place the noise is coming from, much easier to execute! So let’s see what could be behind the obnoxious rattling sound coming from your dashboard.

Why Is My Dashboard Rattling?

If you’ve noticed that your dashboard has already been vibrating for a long time, you’ve probably surmised that certain driving conditions can aggravate the issue. Naturally, any loose parts in your car will vibrate more when you’re traversing rough terrain. However, that doesn’t mean the road itself is the cause of the noise. You shouldn’t have to avoid bumpy streets just because your dashboard is acting up.

As you’ll see, most of the solutions I’ll mention later on focus directly on addressing the source of the noise. So let’s talk about the most common causes of dashboard vibrations.

Loose trim parts are often behind the various rattling sounds your dash might produce. The plastic and metal bits that make up the surface layer of your dashboard shouldn’t be vibrating against each other. Even more importantly, they shouldn’t be shaking against the internal components that keep them fixed in place. Either way, if they have too much leeway, you’ll have to take it away.

Keep in mind that the dashboard also contains all the instruments you need to drive, from the speedometer, fuel gauge, and similar indicators, to the entertainment and AC settings. All those features are usually set into the dashboard separately and can, therefore, cause individual rattling sounds. So, you may have to tackle several sources of noise before the vibrations go away completely.

What’s more, consider that the sound isn’t coming from the surface layer of the dashboard at all. You might be dealing with internal components, like loose cables. Ultimately, you won’t know until you perform diagnostics, which may even include taking a peek inside the dash.

How to Stop Dashboard Rattle

While dashboard vibrations aren’t necessarily a life-threatening problem, you should still get rid of them as soon as you notice them. After all, your dash is directly in front of you when you’re driving — which is the one time you cannot afford to be distracted. With that in mind, let’s see how you can find the exact location of the rattling.

1. Pinpoint the Location of the Loose Part

If you want to find the source of the noise, you’ll first have to replicate the conditions in which you hear it. However, you can’t be the one behind the wheel while you do so. Therefore, you’ll need to get a friend to drive you around.

While they’re driving, keep your ears open for the direction the sound is coming from. You could also press down on the dash firmly to check if the noise will subside. If it does, you’ve probably temporarily immobilized the loose part that’s causing the ruckus. You might want to put a piece of tape over the area to remember it.

If you suspect that the noise is surface-level only, you can check the trim panels by jamming pieces of wood or cardboard into the cracks between them. If that stops the noise, they’re either vibrating against each other on the surface or are too loosely connected to their slots. Fortunately, that problem will be easy to fix — all you’ll need is some gap tape.

After you park, try to replicate the sound manually — it goes without saying, but you should take the key out of the ignition at this point. Again, you’ll want to push against the dashboard, but avoid punching it. The impact noise may conceal the underlying rattle. Besides, using unnecessary force can often exacerbate the problem.

2. Open the Trim Panels and Secure the Internal Components

As we have established, the most likely culprits behind the noise are going to be either the trim panels themselves or something inside the dash. So the first order of business will be to remove those panels. Doing so will also help you perform a more in-depth analysis if the previous step doesn’t reveal an obvious problem. You’ll literally be able to see if any internal components are likely to vibrate against the surrounding plastic.

Now, if you’ve never taken off the dashboard panels in your car, the task might seem a bit daunting. But with the right tools and a bit of prep work, you can nail it on your first try. Most car manufacturers don’t use any screws to attach the trim panels, so they’re probably clipped in place. Still, if you want to pop them out without scratching the dashboard, you’ll need thin, plastic prying tools. 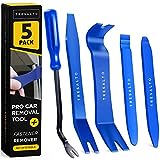 Even if you get your hands on the proper tools, you should look up videos of other people dismantling the dashboard of your vehicle model. You may discover the best place to insert your trim removal tools.

After you remove the trim panels that are making the noise, look at what they’re hiding. Reach into the compartment and try to shake any of the parts you see.

If you have some packing foam sheets lying around, you can use them to immobilize any wires you might see. Alternatively, you could use pretty much any other material as a substitute, as long as it’s appropriate for the area. For example, if the section you’re working on frequently gets warm while you’re driving, you should stick to heat-resistant materials.

3. Pad the Trim Panels Before Pushing Them Back Into Place

After you secure any loose bits lurking under the trim panels you’ve opened, it’s time to put everything back together. However, if your search for the source of the noise has uncovered that the panels are part of the problem, there’s one last thing you can do to silence (and stabilize) them. All it’ll take is some felt or foam tape — even Velcro (the soft side) would suffice!

Since you still want to be able to fit the trim panels back into their slots, you’ll need to use something relatively thin. However, your padding also has to be soft enough to absorb vibrations and cut to fit the panel clips. And, of course, it needs to have an adhesive back. Once you find the appropriate material, you’ll just have to wrap it around the clips, as demonstrated in this video.

Even though those clips make it easier to remove those trim panels, they’re also notoriously loose. It’s a problem most car manufacturers have noticed, which is why they often put anti-rattle padding around them. However, if you remove that padding and put your own solution in place, you may be able to alleviate the noise and strengthen the hold of the clips.

Many of us forget that the glove box is technically a part of the dashboard. Because of that, we often neglect to address the issues that could cause it to rattle. For one, the noise may be coming from the items you’ve forgotten inside the compartment. But more importantly, it could be caused by a faulty door latch.

If your glove compartment door isn’t secure, the first thing you should do is tighten any screws that may affect the latching mechanism. Alternatively, you could just get a new locking mechanism for the make and model of your vehicle. Or, if you’re more of a DIY person, you could use Velcro or double-sided tape. Some people even use magnetic attachments to keep the door up, as shown in this video.

Before you get too excited, though, keep in mind that those magnets were designed for Volkswagen glove boxes. However, as the guy in the video says, they may work on other vehicles as well. I suppose you’ll have to test that yourself.

5. Close the Gaps Around the Dashboard With Weatherstripping Tape

So far, we’ve been working on securing any moving pieces you have under the trim panels. Now, you’ll just need to prevent the panels from coming into contact with each other. Alternatively, if you believe the panels alone are at fault here, you could even do this step first.

If you don’t already have weatherstripping tape you can use to complete this task, measure the gaps between the panels before getting some. In my experience, they’re usually fairly narrow, so you should get the thinnest rubber or foam strip you can find. However, it can’t hurt to measure before you go looking for the tape.

And even if you get the correct thickness, you may need to cut the strip lengthwise to make it fit. You wouldn’t want it to stick out when you finally manage to wedge it into the gaps between the panels.

Enjoy Your Next Drive Without the Pesky Dashboard Rattle

When you’re sitting in the driver’s seat, the dashboard is right in your face. That’s why any noise it makes is so annoying — and it’s also why I can’t stand rattling sounds coming from car doors! If you’re anything like me, you may lose your temper at the first sign of a rattle. However, as understandable as punching it may be, doing so would only make the situation worse.

As you can see, fixing that obnoxious rattling noise coming from your dashboard doesn’t have to be a huge ordeal. All it takes are good tools and some common sense for you to get back to driving through backcountry roads in no time at all.