Even though there are many benefits to soundproofing your car, the project could quickly turn into a huge financial burden. When you look into the prices of the best sound deadening mats on the market, you might find them too expensive to invest in.

But there are plenty of reasonably priced and effective materials you could use instead. To prove that claim, I’ve decided to do an in-depth review of the Kilmat sound deadener and show how it compares to the more famous Dynamat and Noico products.

I should begin by saying that my opinion of Kilmat products is already positive — and well-documented. You may have read about it in my article about the best automotive sound-deadening materials. In my opinion, it has only one potential flaw, which is that it may require a determined and skillful hand during the installation process.

Other than that, it’s pretty much on par with other products in its category. I’d even say that it’s better than several of them in some respects. So let’s talk about why so many people, including myself, consider Kilmat an excellent substitute for Dynamat and Noico.

When it comes to gauging the value of soundproofing materials, there are several properties we ought to consider. I’ve spoken about all of them in previous articles, but in case you’re not up to speed, I’ll be looking at:

But for now, let’s focus on determining whether the 80-mil Kilmat even has what it takes to stand up to the two top-tier sound deadening mats in the first place.

The Kilmat sound deadener looks fairly similar to the other mats I’ve seen, in that it has a silver foil side and a black adhesive side. The foil side has the black Kilmat logo printed all over it. If you’re planning to leave it exposed somewhere, like in the trunk, that may cause you to deduct some points. Since the logo isn’t particularly offensive, I don’t have a problem with it.

Of course, you’ll want to pay more attention to the black side of the sheets. In the world of automotive soundproofing, there are two main base materials companies use to make their mats. If you want a more detailed explanation of the pros and cons of each of them, you can check out my article about butyl and asphalt-based materials.

Asphalt-based materials tend to emit a rubbery odor and even leak in high temperatures. Now, you might think that those flaws are worth the lower price point of those materials. However, as you will soon see, some butyl-based materials are more budget-friendly than others.

Conversely, since butyl is essentially synthetic rubber, it’s relatively heat-resistant. Therefore, butyl-based materials like Kilmat are great at taking on the high heat our vehicles produce. That makes that it should also effectively insulate your car from the effects of extreme external temperatures. Furthermore, the rubber base should also seal any cracks in the sheet metal of your vehicle and thicken it to create that much-needed barrier against outside noises.

No matter which automotive soundproofing materials you end up using, you shouldn’t expect the installation process to be a walk in the park. Whether it’s asphalt or butyl-based, the black side of the material will inevitably stick to everything except the surfaces you want it to stick to. Suffice it to say, you’ll have to work quickly and paste the mat on with a decent degree of accuracy.

As always, you’ll have to press the mat onto the inside of your car doors or under the hood using a roller or some type of rounded tool. Most of the time with these kinds of materials, you won’t be able to tell if you’re doing a good job. However, Kilmat has devised a fantastic solution to that problem: a special application indicator. The rectangle embossing on the foil side isn’t just there as a nice decorative touch — it serves a practical purpose.

When you start rolling the mat over the sheet metal, you’ll flatten the embossing out. That should give you a better idea of the sections you’ve already pressed in. Furthermore, the fact that it comes in 9.8 by 15.7-inch sheets should make it even easier to cut and install.

Of course, there are some downsides to using the 80-mil Kilmat as well. By all accounts, the material can be a bit too stiff for comfort. The 50-mil Kilmat, though thinner and therefore less effective, may be more malleable.

Ultimately, all of these products are made for the express purpose of soundproofing your vehicle. However, there are other things you could use them for as well. For example, you could use them to thicken up all kinds of devices that are made of thin metal — like washing machines.

Still, it should be noted that the Kilmat brand has never stated that their mats should be used for anything other than automotive soundproofing. But even if you don’t, you’ll have plenty of ways to use them. In addition to the car doors and the hood, they can go all over the floor, behind the firewall, in the trunk, behind the license plate, and on the roof.

Depending on the surface area you want to cover, you’ll need different amounts of sound deadener. If you’re just doing the firewall and the floor on a subcompact vehicle, you may only need 26 square feet of Kilmat. But for total coverage on an SUV, you might need as much as 137 square feet. Either way, you’ll want to consult Kilmat’s calculation table before placing your order.

The effectiveness of an automotive sound deadener ultimately depends on its thickness and weight. As I have mentioned, the thickness of this material is the same as that of the Noico mat — 0.08 inches. However, it weighs a bit less than Noico, at 0.5 pounds per square foot of material. Conversely, Noico supposedly weights 0.7 pounds per square foot.

There are other things to consider as well, including how it behaves in high temperatures and how well it can insulate the vehicle. Furthermore, it should also suppress the vibrations, rattles, and squeaks that the car itself produces. As we have seen, Kilmat performs exceedingly well in all of these categories — provided that you’ve installed it properly.

Obviously, that price point puts it well ahead of the curb in comparison to the most famous mats on the market. Speaking of which, let’s see how Kilmat compares to those products.

Now that I’ve told you everything there is to know about Kilmat, let’s see how it fares next to the two industry giants:

Overall, you’ll find that it’s a fairly even playing field.

The first conclusion you’ll come to as soon as you look at these three products is that they’re all made of the same stuff: synthetic rubber. They all utilize it in slightly different ways, though.

Noico is as thick as Kilmat, but it’s denser, judging by the slight difference in mass. Dynamat is thinner than both but it still reigns supreme as far as most people are concerned.

Noico and Kilmat both have those embossed bubbles on the foil side of the mats to make them easier to install, while Dynamat doesn’t. Furthermore, Noico is the only one of the three that doesn’t have a logo print all over the foil side. So at least you won’t feel like your vehicle is a Noico ad when you pop the trunk and flash the exposed mat.

Kilmat May Be a Bit Difficult to Install

Some users have noted that Kilmat is somewhat stiff and unmanageable, despite having the same thickness as Noico. But that may be more due to the inexperience of the person who’s installing it than anything else. Even the thinner 67-mil Dynamat can be unwieldy in the hands of an inexperienced person. So I believe the problem should go away if you do your research before jumping into the project.

Now, Kilmat and Noico aren’t technically meant to be used on any surfaces outside of your vehicle. But Dynamat encourages inventive uses. Since these products have such a similar structure, I imagine you’ll be able to use Kilmat in the same way.

In my previous Dynamat alternatives article, I discovered that Dynamat is priced at $6 per square foot. Of course, if the product is doing what it says it can in a way no other brand can — there’s nothing wrong with a steeper price point. 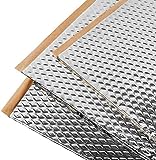 Let Your Wallet Choose for You

Ultimately, I’ve found that these three products are similar enough that you can let your budget choose for you. If you want to go for the classic option, and you don’t mind the premium price, go with Dynamat. However, Noico and Kilmat are both worthy replacements for people who are looking for mid-to-low range options.

But what if no amount of butyl-based mats is able to muffle engine or tire noise? Well, in that case, you might want to look for cars with futuristic soundproofing features like active noise cancelation. That will surely eliminate any road noise — or at least help you get the most of your sound deadening mats.