If you already live in a city, you may have grown numb to the incessant background noise that can be heard at all hours of the day and night. However, if you haven’t quite learned how to live in noisy environments, you might want to consider getting a noise-canceling system for your home.

Sadly, noise pollution will only become a bigger issue as more people move into busy urban areas. Eventually, regular soundproofing techniques will become insufficient and we’ll have to look for advanced technological solutions. Today, you’ll see what some of those solutions might look like and how you could incorporate some of them into your home.

What Is Active Noise-Canceling Technology?

Devices with active noise-canceling technology have microphones that record all surrounding sounds and speakers that simultaneously play the exact inverse frequencies. Somewhere between those two, there’s a computer that inverts those soundwaves. But that system only works on certain kinds of noise.

Active noise-canceling technology was invented by Amar Bose in the late ‘70s. The invention was the result of frustration over the constant whirring sounds people were exposed to on flights. And so, the first Bose aviation headset was tested on the people who had to live with that noise every day — pilots. The headset allowed them to communicate with each other and with Air Traffic Control without interference.

As you may know, all sounds have a distinct shape. If two different soundwaves reach your ears simultaneously, you would perceive them as being louder than they are — that’s constructive interference. However, active noise-canceling technology relies on the opposite effect — destructive interference. When two soundwaves are the exact opposite of each other, they cancel each other out.

So how does that concept translate into active noise-canceling headphones? Well, most of those products have a separate microphone that’s constantly recording environmental sounds. Almost simultaneously, the device inverts those soundwaves and plays the resulting audio through the speakers.

The slight delay between the original sound and its inverted counterpart makes it impossible for this technology to cancel out all sounds. Namely, it mostly works on constant and continuous sounds. That’s why this technology was such an effective solution for pilots. Of course, that also makes it very useful for blocking out the sound of traffic without having to worry about missing important sounds like horns or sirens.

Before we can talk about what active noise-canceling technology might look like in your home, we ought to look at smaller spaces that are easier to control. Fortunately, we already have examples of successful implementation in some luxury vehicles.

In a sense, the vehicles with active noise cancelation you see in the market today are the first models that have successfully implemented the feature. So it took teams of engineers a total of twenty years to soundproof an enclosed space with the help of this technology.

Bose’s automotive noise control system measures tire rotation to calculate road vibrations, then plays the inverted sound of those frequencies through the speakers in the cabin. Between the original rotation readings and the playback, it uses microphones stationed near every seat to optimize the inverted audio for every passenger of the car.

Sadly, no such products exist yet. In the past decade, some inventions have brought us closer to that idea, but none of them have been reliable enough. For now, we have to realize that active noise cancelation is only one part of the process. Before you get to install a noise-canceling system in your home, you’ll have to use other methods to properly seal the space.

How to Make a Noise-Canceling System for Your Home

Right now, implementing certain soundproofing methods is the best thing you can do to prepare your home for the kind of futuristic noise-canceling system you’ve been dreaming of. With that in mind, let’s start where we always do — with the doors and windows!

1. Seal and Thicken the Doors

Most outside noise comes into your home through the front door. So that’s the first path you’ll have to cut off. To do that, you’ll have to make sure any external doors you have are solid, not hollow. If you can’t buy solid wood doors, fill them with expanding foam, sand, or insulation.

Once you have that impenetrable surface there, you’ll have to work on closing any gaps you see around the wood. Apply weatherstripping tape along the inside of the door frame and attach a door sweep or draft stopper to the bottom of the door. If you still feel a draft, it might be coming from the cracks in the wall around the door frame. You can use acoustic caulk to seal those fissures.

If you want to make it difficult for noise to pass through interior doors, you could repeat these steps for all of them. Additionally, you could cover them with soundproof blankets or room divider curtains.

2. Weatherstrip and Cover the Windows

After your doors are sealed, you can move on to the windows. Luckily, all the same principles apply. If your existing windows are too thin, get ones that have double- or triple-pane glass. The air between the glass will help insulate your home from external noise and besides — new windows usually have excellent weatherstripping.

If you insist on using your old windows, you might want to install new weatherstripping tape on the window frame. You could also caulk the area right around the window frame. Lastly, if you feel like the glass could use some mass, you can cover it with soundproof blinds or curtains. Alternatively, if you’re willing to sacrifice the view, you could construct a window plug to keep the noise out.

3. Add Mass to the Walls

Sealing your doors and windows should be enough to keep most sounds out of your home. However, if some still manage to enter, you might have to implement some more serious soundproofing methods. If cheap solutions fail, you should apply new insulating materials under the drywall.

What’s more, if you live in an apartment, you’ll also have to consider soundproofing your floors and ceilings as well. Fortunately, doing so shouldn’t cost much — and the latter could be done without removing the drywall.

At this point, white noise machines are the closest things you can have to a functioning home noise-canceling system. After all, white noise is a mix of all frequencies humans can hear. So it should disguise any sound that manages to come into your home despite all the barriers you’ve set up.

Now, white noise machines have a wide range of uses. People have put them in offices and nurseries alike. Thankfully, the sound isn’t too distracting — it could even improve your focus and promote relaxation. However, there are some things you should know before you get a white noise machine. 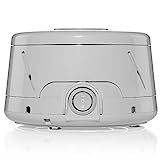 For one, if you don’t like the high pitch of regular static, you might appreciate pink or brown noise instead. Since these signals have the same effects as regular white noise, you can choose the color you like best.

Of course, not all white noise machines offer a wide range of sounds anyway. If you get an electric one, you’ll be able to choose between several true white noise tracks and some nature sounds too. Conversely, mechanical machines like the Marpac Dohm model use an internal fan to produce a more organic sound.

Ultimately, though, you could find a decent selection of white noise and ambient sounds online. Just set up speakers all over your house and play whichever audio you like to muffle any sounds that manage to sneak in.

The Future of Noise-Canceling Devices for Home

Now that you know the extent of the things you can do to prepare your home for a real noise-canceling system, let’s look ahead. As you’ll see, several products have shown some promise. However, none of them are performing at the level you’d need if you wanted to use them in your home.

To begin with, let’s talk about Sono and Muzo since the two devices are so similar. Like any active noise canceling products, these two use inverted soundwaves to reduce noise. By affixing the palm-sized machines to a window or door, you’d be turning them into a speaker of sorts.

Sono and Muzo first measure environmental noise and vibrations with built-in microphones and sensors. As soundwaves pass through your doors or windows, these devices should imperceptibly vibrate against them to counteract the source oscillations. There’s just one problem — neither of them actually work like that.

For one, Sono is merely an industrial design concept created by Rudolf Stefanich in 2013. The video demonstrates the way it will work when someone decides to make it. Ideally, it would even be able to insulate certain outside noises and replace them with more pleasant sounds.

While Muzo has made similarly outlandish claims, at least it’s an actual product you can purchase. It has three modes. One of them uses vibrations while another adds ambient noise into the mix. Lastly, the manufacturer claims that the Secret mode can mask your conversation by creating a privacy bubble around you.

Sadly, as tests like this one have proven, the device doesn’t work like that in real life. Still, if either of these products ever delivers on its promises, you’ll be able to fit a noise-canceling system in your back pocket. But for now, white noise machines are probably more effective.

The Whisper device by Noxcel was another noise-canceling system that never got the funding it needed to come to life. According to the project Kickstarter video, it was an even more advanced concept than the two mentioned above.

The product would have been self-charging, thanks to a solar panel part that would attach to the outside of a window. That component would also have microphones, which would send the inverted signals to the internal speaker. Naturally, the two parts were to be connected with wireless charging technology. Additionally, you would have been able to connect the device to your smartphone via Bluetooth and even use it as a wireless speaker.

Unfortunately, we’ll probably never know what the finished result would have looked like. The company had to back out of their Kickstarter project when they realized they wouldn’t reach their goal. Still, this may give us some idea of what a noise-canceling system might look like in the future.

Clearly, windows have a huge part to play in the future of home noise-canceling systems. With that being said, let’s talk about a recent invention that would replace your windows, rather than being tacked onto existing ones.

In July 2020, a team of researchers from Singapore published a paper that claimed that their Anti-Noise Control Window prototype could knock 10 decibels off in any environment. If you didn’t know, those ten points represent a halving of the total noise level, so it’s quite an impressive feat!

So how does it work? Well, it has everything an active noise-canceling system ought to have. A microphone outside the window detects repeating soundwaves and a computer inverts the frequencies. Then, a network of speakers attached to the glass neutralizes the noise.

The only potential problem with this is that it might obscure your view. But these are promising results to keep in mind, particularly if you want to be first in line if and when these researchers develop a functional product.

Enjoy the Sound of Silence in Your Home

Even though these solutions are years or decades away from becoming integrated into our homes, you shouldn’t spend all that time putting up with the noise. Simply by sealing the windows and doors, you should be able to achieve some modicum of peace. After that, you’ll just have to wait for technology to catch up to your wish for a quiet home.